Reggie’s Friends was founded out of our pure love of street dogs!

Being parents to our former street dog Reggie and living in a city with a massive homeless animal crisis drove us to figure out how to do something to help!

Reggie’s Friends is a registered 501c3 non-profit animal rescue organization dedicated to helping Street Dogs find Sweet Lives both in Houston and across the country. Our team of dedicated volunteers work tirelessly to place our amazing dogs into equally amazing forever families!

In addition to adoptions, Reggie’s Friends also devotes time and resources to animal welfare education as well as helping community members vaccinate, spay/neuter owned pets as a way of helping cut down on the number of homeless pets.

At Reggie’s Friends, we live and love by our motto #Street Lifet To Sweet Life! 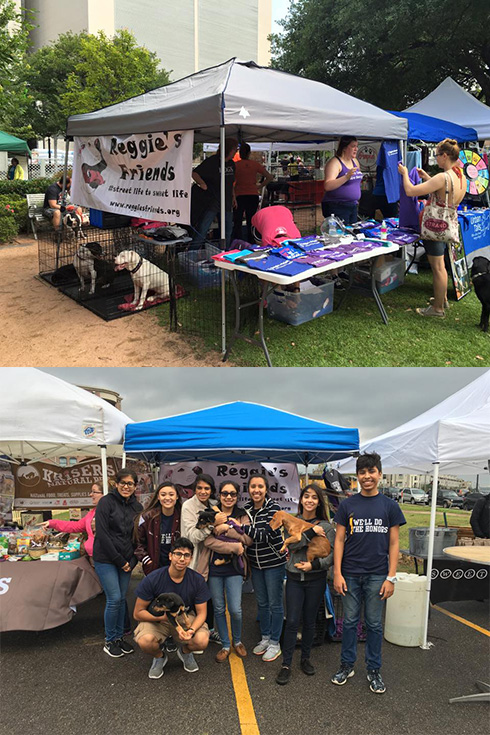 Adoptions:
0
Animals
Adopted In:
0
Cities
Embraced In:
0
States
Across:
0
Countries

Donate to Reggie’s Friends or any one of our Adopatables

Reggie was found wandering, abandoned and starving, in Northeast Kansas. He was taken to a low-kill shelter, but he was really scared and screeched a lot. Reggie is deaf, so he doesn’t hear himself or the noises he makes. His squealing was difficult for the staff and volunteers to manage and it was decided that he would be euthanized.

Just a few days before he was scheduled to be put down, a 16-year old volunteer from Game Dog Guardian, a local pit bull rescue, convinced her mom to foster him. He left the shelter and went home to the most amazing foster home who worked hard on his manners and behavior. He of Reggie was posted to GDG’s website and one day, I was surfing around for a dog to SPONSOR and came across Reggie’s photos. His profile read: “Reggie is a deaf pit bull…” this was a little crazy because Reggie’s dad’s father is Reggie and he is also deaf.

We thought it may have been fate, but we hadn’t committed to bringing another dog into our home. We had two dogs already and Reggie was 750 miles away. One day, about a week later, we decided we needed him in our lives. Our family helped transport him from Kansas to Houston and we were instantaneously in LOVE with him!

At first, we were nervous bringing a deaf dog home. We didn’t know if/how he would be different from hearing dogs. But, there was no need to worry, he fit right in, like he had been here forever. Reggie is very smart, learned hand signals quickly, and is generally adored by everyone who meets him. He is the biggest ham and his adoption is one of the best decisions we ever made.

Because of Reggie, we began fostering dogs for local rescues (we have fostered over 50!) and started Reggie’s Friends to help people help animals. We couldn’t believe that a dog as amazing as Reggie could face breed specific legislation in some cities (we actually can’t take our dogs to visit our family because “pit bulls” are banned there) or that anyone could ever think he was “dangerous”. We strive to advocate for bully breeds, help rescues access necessary supplies and vet care for their animals, and assist the public through spay/neuter initiatives, vaccinations, and microchipping.

You can read more about Reggie at:
I’m Not a Monster
Deaf Dogs Rock

Are you ready to rescue?

Start the process by filling out an application or visit our adoptables page to find the newest addition to your family!

Your pet’s food can have a profound impact on its overall wellness. The following links provide some great information about the quality and ratings of some of the most popular brands of pet foods.